The Long Road To Coaching Accreditation

Mind Transformations’ intention to be an accredited body to conduct professional coaching courses goes all the way back to 2003. The idea of “issuing” an additional “Coach” certificate to gain marketing and sales advantage is unprofessional and actually – marginally unscrupulous. Mind Transformations needed a formal independent coaching body to professionally examine its coaching knowledge and capabilities, and accredit the company to certify people as Life and Executive Coaches.

It was after 10 years, in 2014, when Mind Transformations found the International Association of Coaching Institutes (ICI) that the coaching accreditation became a reality. 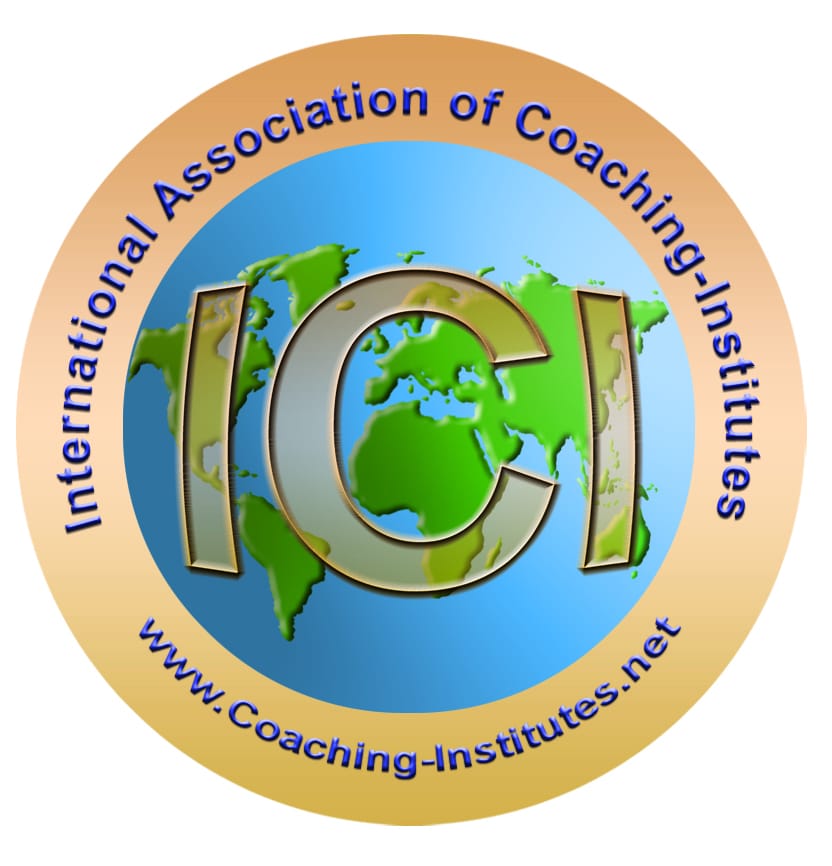 The application process took 4-5 months and the exchange between ICI and Mind Transformations was very intense due to ICI’s stringent requirements. Though ICI recognised NLP as a robust coaching methodology, it required strict adherence to a large quantity of hours (1120 hours) in classroom coach training, assistance in coach training, coaching supervisions and actual coaching experience. In other words, coaching professionals applying for Coach Master Trainer need to demonstrate this in their application.

Apart from fulfilling a detailed list of coaching topics spelt out by ICI, a recognised coaching institute needs to ensure that 90% of its training days are conducted in classrooms (non-virtual). And the classroom days demanded by ICI is 30 days for the Coach level and 54 days for the Master Coach level.

In addition to this requirement, Mind Transformations has instituted the requirement of 40-60 hours of “actual coaching” for aspirants seeking Life and Executive Coach Certification. The intent behind this is to ensure that ICI Certified Coaches not only have the competence to coach, but also the confidence. It is espoused in Mind Transformations that knowing in the head does not necessarily mean that one can do it. Therefore much of Mind Transformations’ coach training approach is focused on “actual practising” rather than just “observing and note-taking.”

The International Association of Coaching Institutes (ICI) originated in Germany in 2001.

ICI’s vision is to use coaching to help people actualize their potential and to contribute to a peaceful world where everybody wants to belong. Its mission is to be an association where:

a) members can learn from the best practices of each other;

b) coaching applications are bridged with academic education and research;

d) excellent ethics and coaching standards are raised or maintained.

As of Feb 2018, ICI is now present in 63 countries and growing every year.

The ICI facilitates a World Congress every 2-3 years in different countries.

Karl Nielsen, Ph.D. is the founder of ICI and the co-developer of Neuro-Linguistic Psychology.

For him, the ICI stands for the highest ethical and quality standards in coaching to further develop the human potential and the manifestation of a peaceful and ecological world. As a professor responsible for M.A. and Doctoral studies, his vision is to prove the scientific effectiveness of Neuro-Linguistic Psychology and Coaching, and to help the world see the need for high-quality NLP and Coach training.

Dr. Nielsen is a serious practitioner of Clare Grave’s Adult Development Theory – now known as Spiral Dynamics. He built the ICI on an open architecture, based on the dynamics of the 7th level (out of 9 levels) of consciousness. The 7th Level (Integral) is a significant leap in human consciousness, characterised by: a leap in behavioral flexibility and open-mindedness to new ideas; the neural complexity to integrate the strengths of the earlier 6 levels; Maslow’s Being/Growth Levels, i.e. not driven by deficiency needs (fear) but the need to bring forth a better version of oneself to contribute to others.

Mind Transformations is fully in sync and aligned with the above precepts and intentions.

The Founder of Mind Transformations, Barney Wee, is currently working on his Ph.D. dissertation on Professional Coaching & Human Development, as he sees the importance of promoting the academic side of coaching to further elevate the credibility of the profession. Barney’s decade-long interest in Adult Development has brought him to the classrooms of Chris Cowan (Spiral Dynamics), Susanne Greuter (Ego Development Theory), Danah Zohar (SQ) and Cindy Wigglesworth (SQ). Spiritual Intelligence (SQ) is a vital part of adult development, as Maslow has clearly shown us the way with his 6th level motivation, i.e. Self-Transcendence.

According to Karl’s research, 97% of mankind is still living in one of the 6 levels. Mind Transformations is in full alignment and support of ICI’s quest to promote understanding and the operationalization of the healthy aspects of the 6 levels, and the progression of more people to living at the 7th level (Integral). At the collective level, if a critical mass (tipping point) of people live and “be” at the 7th Level (Integral), a thriving and sustainable future can be achieved socially, biologically and environmentally.

In its relentless effort to improve its coaching effectiveness, Mind Transformations has been evolving its coaching approach and toolbox since 1997. 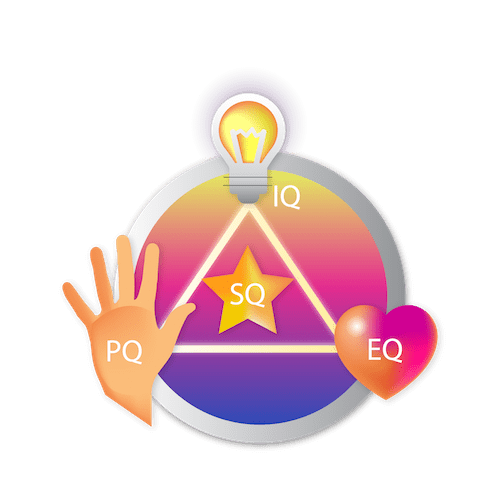 The name Multi-Intelligence was first coined by Harvard Professor Howard Gardner in the 1980s, but Mind Transformations is the first to reformulate his 8 intelligences into 4 major interconnected intelligences applied in the field of coaching. Multi-Intelligence Coaching asserts that unless that one is able to align one’s knowledge/understanding to one’s appropriate emotions, bodily actions and sense of purpose and meaning, one does not have competence and lasting change. It therefore firmly states that effective coaching is not just simply “talking and thinking” (IQ), it involves tapping into and mobilizing one’s physical (PQ), emotional (EQ) and spiritual (SQ) intelligences.

The ability to utilize the science of Multi-Intelligence Coaching relies heavily on synthesizing the intelligences of the body, mind, heart and spirit, i.e. to create a unified, robust and multi-layered framework that simultaneously mobilizes the 4 intelligences synergistically. In 2017, a vital innovative step has been made in that direction with Mind Transformations’ Micro-Skills Workbook for Coaches. This innovative practical workbook not only pinpoints and guides a coach in mastering the necessary skill-sets, it also progressively and proactively aligns the coach-wannabe to his identity as a coach.

The spirit that enabled Mind Transformations to reach its current point of achievement is Kaizen. 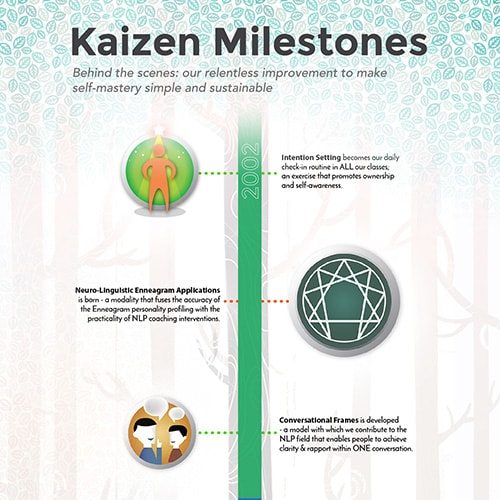 The Japanese rose from the ashes of destruction in the Second World War to a global technological superpower with the spirit of Kaizen. It is superficially known as “change for the better” but in deeper linguistic analysis, it means “sacrificing and disciplining oneself to serve a greater good.” It is with this 50-year-old proven wisdom of Kaizen and the futuristic world-changing vision of 7th Level (Integral) Consciousness of Spiral Dynamics that we unite with ICI to build an ecological world through coaching.

Are you thinking about Coaching as your next career progression? 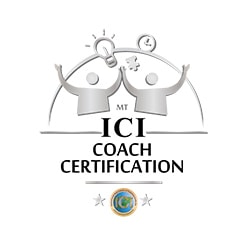 You’ll surely need more than just a certification to do well in this field. So how do you start? How do you shorten your competency curve to become a good coach?

We are happy to discuss our experience in coaching, and how you can apply Multi-Intelligence-NLP coaching in getting results with people. Most of all, Coaches who do well have ONE additional factor that puts them above amateur coaches—a Coach’s way of being. Join us in our Life & Executive Coach Certification Programme accredited by ICI, Germany.